Thought For The Day

Posted on September 24, 2018 by Alan Burnett Leave a comment

Mary The Beekeeper And The Flight Of Fancy Simulator

The thing about playing around with old, lost and forgotten photographs is that it provides a vigorous workout for the imagination. It is like a well equipped gym of thoughtfulness set inside a state of the art flight of fancy simulator. You can look at a picture that stopped time a century or more ago and let your mind sketch in whatever detail it desires. The person is happy, the person is sad; the person is rich, the person is poor; the person goes on to lead a full and happy life, the person gets run over by a tram as they leave the photographers’ studio: any narrative is potentially possible. And occasionally, just occasionally, through some combination of luck and “big data”, you get to check out your imagined narrative against reality.

This is a small Victorian Carte de Visite of a young girl which was taken in the Carnarvon studios of the photographer Hugh Humphreys. It shows a sad looking young girl aged about ten years old and a first guess would suggest that it must have been taken in the 1880s. However, look carefully on the reverse of the CdV and you find that some kind soul has written a name – Mary Dagmar Sillar. And what a name: if it had been Jane Smith or Mary White, you might have had difficulty; but Mary Dagmar Sillar – there’s something to get your data-hungry teeth into. 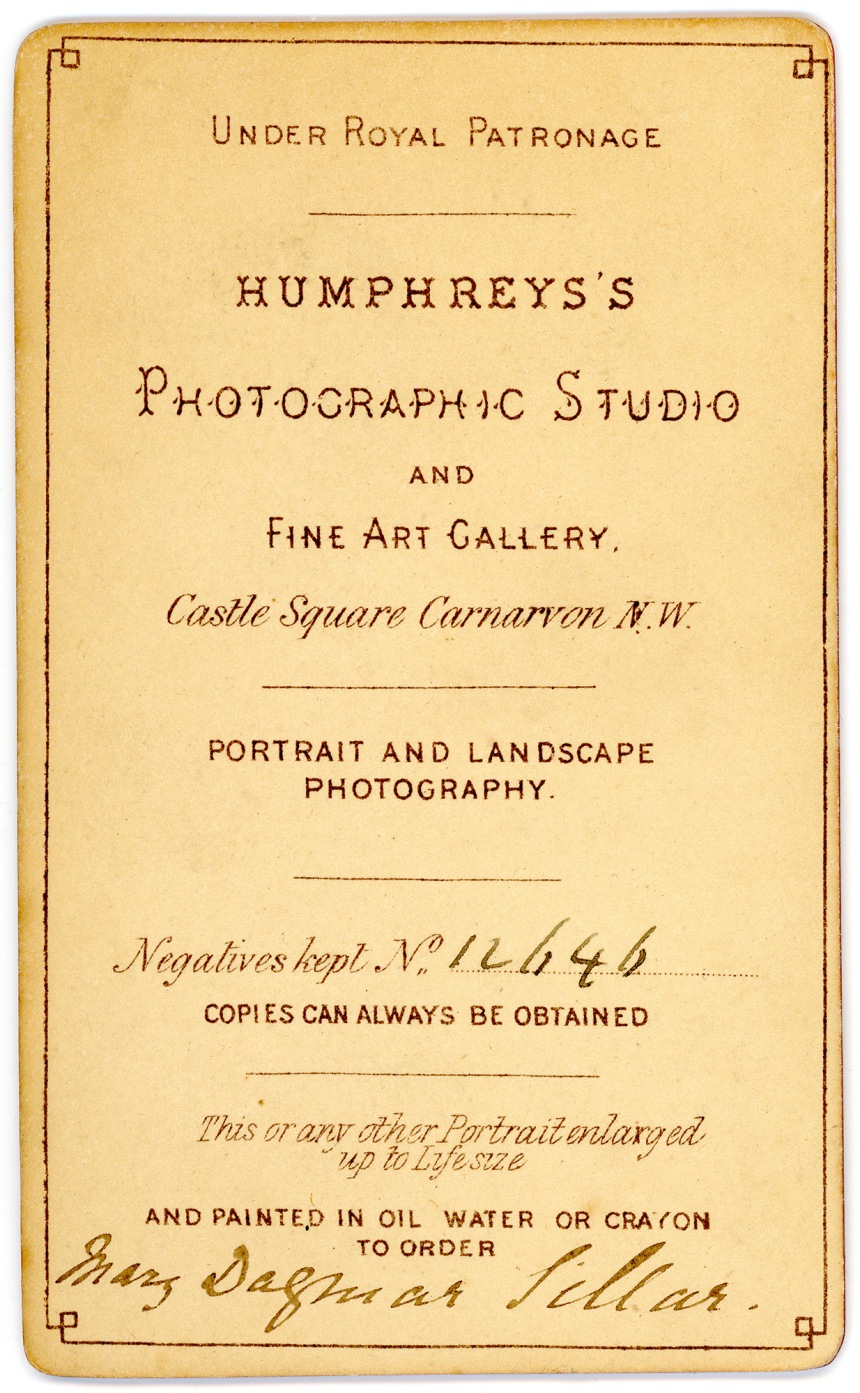 Mary Dagmar Sillar was born in Lewisham, London in 1873, the second daughter of John Charles Sillar and his wife, Jane Ellen Jones. Her father was a tea broker and worked in the City of London buying and selling tea on the international markets: a job which no doubt allowed a comfortable lifestyle for himself and his family. Tragedy arrived in young Mary’s life when she was just two years old and her mother died aged just 26. The response of most Victorian fathers to such events – which were not uncommon in an age when childbirth was a perilous activity – was to find another wife and stepmother double quick: but John Charles Sillar did not follow that particular route, he moved his small family to North Wales to live with their maternal grandmother.

It is in this period that Mary had her photograph taken, and the sadness in her eyes reflects the sadness of her short life. A second tragedy struck in 1895 when she was just 22 years old and her father died. By the turn of the century Mary and her sister Gwen were living in a boarding house in Colwyn Bay in North Wales. No occupation is listed in the census returns and therefore we can assume they had what at the time were called “independent means”.

Both sisters disappear from the records by the time we get to the 1911 census, but by 1914 they are back again, and Gwen is getting married to, presumably, a cousin Ernest Gemmil Sillar who is a tea planter. Mary – by now in her early 40s and still unmarried – is one of the witnesses at the wedding. We catch a final glimpse of Mary in 1939 – at the time of the pre-war 1939 Register – when she is living in retirement with her sister and brother-in-law in Hailsham, Sussex. Finally we get a clue as to what she has been doing all her life because her occupation is listed as a retired “poultry and bee expert”! The final record available is that of her death in 1963 at the age of 90.

However good your flight of fancy simulator was – you would never have made that story up.

Great Chips Of The World : Series III, No. 5 – Saphire

Posted on September 20, 2018 by Alan Burnett Leave a comment

Posted on September 19, 2018 by Alan Burnett Leave a comment

86 Years On The Prom

Posted on September 19, 2018 by Alan Burnett Leave a comment

This is Fred and Hazel walking along the promenade in August 1932 (there are people out there who will recognise which promenade it is, and – in the great traditions of the internet – will tell me). George V has just opened Lambeth Bridge and Forrest Mars has just produced the first Mars Bar. Aldous Huxley has just published Brave New World and Hunger Marches are heading for the capital to protest about poverty and unemployment. Fred and Hazel, however, walk down the promenade and have their photographs taken. They will send the little print to Aunt Agg and Uncle Jack, who will stick it in the family album. There it stayed, forgotten, for eighty-six years …. until this morning.

Posted on September 18, 2018 by Alan Burnett Leave a comment

This is a new scan of a negative I must have shot some thirty-seven years ago at a Yorkshire Miners’ Gala in Rotherham. It was a few months before the start of the miners’ strike, and there is Arthur Scargill pointing the way. Somehow it has turned itself into a sepia print – which is rather fitting perhaps.

Posted on September 18, 2018 by Alan Burnett Leave a comment

Everybody these days seems to have a motto: some cheery little maxim that manages to condense the ethos of their organisations into a few meaningless words. On my way to the park the other day to walk the dog, I noticed that the local school was dedicated to “Aspire And Achieve” – which is a comforting declaration as otherwise I might have thought it was all about nose-diving into failure.
Finding myself driven indoors today by the remnants of some trans-Atlantic hurricane, I can’t decide whether it is summer or winter: it looks cold but I feel all hot and sweaty. I spend my time sorting through piles of old photographs and negatives, attempting to index them, file them, catalogue them.
I need a large wooden display board to erect outside the front gate with my motto on: – “Perspire And Archive”

Posted on September 17, 2018 by Alan Burnett Leave a comment

This is a studio portrait, dating from 1913, of the German theatre and movie actor, Harry Walden. He was born in 1875 in Berlin and – following a period in the army – became an actor: first of all in the theatre and then from 1912 onwards in the German film industry. His end was tragic: he became addicted to morphine and eventually committed suicide in 1921.

Posted on September 17, 2018 by Alan Burnett Leave a comment

Taken from Scarborough Harbour, looking south. The magnificent facade of the Grand Hotel can just be seen in the background above the masts.